At the core of Lanz von Liebenfel's theory of Theozoology was the concept of 'dysgenics', - the infusion of degenerate elements into the race.
(The adjective "dysgenic" is the antonym of "eugenic").
Dysgenic effects can be demonstrated in the physical decline of a population (see: Racial Hysgiene in Germany), however, Liebenfel's main concern, while not neglecting the physical component of degeneration, was the spiritual damage caused by 'dysgenics'.
'Miscegenation' - (from the Latin 'miscere' 'to mix' and 'genus' "kind") is the mixing of different racial groups through marriage, cohabitation, sexual relations, or procreation. The term miscegenation has been used since the 19th century to refer to interracial marriage and interracial sexual relations, and more generally to the process of genetic admixture.
The concept of miscegenation is tied to concepts of racial difference, and racial and spiritual 'degeneration'.

Racial, spiritual and social degeneration - known in Germany as 'Entartung' - was a widely influential concept at the interface of the social and biological sciences in the 19th century.


'Degenerationists' feared that civilization might be in decline, and that the causes of decline lay in biological change.


These ideas derived from concepts of heredity with an emphasis on biological development through purpose and habit.
Degeneration concepts were often associated with authoritarian political attitudes, including militarism and racial science, as well as with fears of national decline.
The theory originated in racial concepts of ethnicity.
In addition the concept of degeneration was associated with the industrial revolution, and the associated profound social changes and a rapidly shifting sense of personal identity.
Other factors included the extreme demographic upheavals of the period, including urbanization, in the early years of the 19th century.
The disturbing experience of social change and urban crowds, largely unknown in the agrarian 18th century, was recorded in the novels of Charles Dickens, in the paintings of J M W Turner and by early writers on social psychology, including Gustav Le Bon and Georg Simmel.
The psychological impacts of industrialization are comprehensively explored in Humphrey Jennings' masterly anthology 'Pandemonium 1660 - 1886'.
Social reformers of the time voiced realistic concerns about the decline of public health in the urban life of the working class (urban squalor).
The reformers argued for improved housing and sanitation, access to parks and better recreational facilities, an improved diet and a reduction in alcohol intake.
The novel experience of everyday contact with the working classes gave rise to a kind of horrified fascination with their perceived reproductive energies, which appeared to threaten middle-class culture.
From the 1850s, it became influential in psychiatry, and by the 1890s, the concept of degeneration became a more general concept in social commentary.
The concept of 'Entartung' had been steadily growing in use in German speaking countries during the 19th Century, and reflects views on a degenerating society held by many people in Europe at the time, especially throughout the Austro-Hungarian Empire - where Liebenfels wrote and published.
By the early 20th century, the idea that society was degenerating was commonplace.
This belief was given legitimacy by the branch of medicine called 'psycho-physiognomy'.
Degeneration was accepted as a serious medical term, and not until Sigmund Freud, and the ushering in of a new age of psychoanalysis, was this idea seriously contested.
The meaning of degeneration was poorly defined, but can be described as an organism's change from a more complex to a simpler, less differentiated form, and in this respect it is associated with 19th century conceptions of biological 'devolution'.

An important figure in the discussion of 'degeneration' was Arthur de Gobineau, who came from an impoverished family (with a domineering mother), but who claimed an aristocratic ancestry.
Initially he was a failed author of historical romances and his wife was widely rumored to be a Créole from Martinique.
De Gobineau nevertheless argued, when he began writing about racial matters, that the course of history and civilization was largely determined by ethnic factors, and that interracial marriage ("miscegenation") resulted in social chaos.
De Gobineau built a successful career in the French diplomatic service, living for extended periods in Iran and Brazil, and spent his later years travelling through Europe, lamenting his mistreatment at the hands of his wife and daughters.
He died of a heart attack in 1882 while boarding a train in Turin.
His work was well received in German translation - not least, and very influentially, by the composer Richard Wagner, and the leading German psychiatrist, Emil Kraepelin, who later wrote extensively on the dangers posed by degeneration to the German people.
De Gobineau's writings exerted an enormous influence on the thinkers who strongly influenced the racial doctrines of the Third Reich.

"The word degenerate, when applied to a people, means that the people no longer has the same intrinsic value as it had before, because it has no longer the same blood in its veins, continual adulterations having gradually affected the quality of that blood....in fact, the man of a decadent time, the degenerate man properly so-called, is a different being from the racial point of view, from the heroes of the great ages....I think I am right in concluding that the human race in all its branches has a secret repulsion from the crossing of blood...."

Arthur de Gobineau (1855) 'Essay on the Inequality of the Human Races'."

The obvious solution to Entartung, as proposed by such individuals as Richard Wagner and Lanz von Liebenfels, was Regenerierung - regeneration.
Wagner first approached the concept of Regenerierung in his many writings, and it was also a central theme in a number of his operas - particularly 'Parsifal'.
After the death of the 'master', many of his followers, especially in Bayreuth, took up  this concept and developed it into a complex, yet coherent philosophy.
Foremost  among these followers of the doctrine of Regeneration was Wagner's widow, Cosima Wagner, and her daughter Eva, who was married to the writer and philosopher Houston Stewart Chamberlain.

Cosima Wagner (Cosima von Bülow - born Francesca Gaetana Cosima Liszt; 24 December 1837 – 1 April 1930) was the daughter of the Hungarian pianist and composer Franz Liszt. She became the second wife of the German composer Richard Wagner, and with him founded the 'Bayreuth Festival' as a showcase for his 'music dramas'. Wagner was also a close friend of the philosopher Nietzsche. After Wagner's death she devoted the rest of her life to the promotion of his music and philosophy. Commentators have recognized Cosima as the principal inspiration for Wagner's later works, particularly 'Parsifal'.

Houston Stewart Chamberlain (9 September 1855 – 9 January 1927) was an English-born German author of books on political philosophy, natural science and son-in-law of the German composer Richard Wagner. In December 1908, twenty-five years after Wagner's death, Chamberlain married Wagner's stepdaughter, Eva von Bülow. Chamberlain's two-volume book, 'Die Grundlagen des neunzehnten Jahrhunderts' (The Foundations of the Nineteenth Century), published in 1899, became one of the many references for the pan-Germanic movement of the early 20th century, and, later, of the völkisch philosophy of the Third Reich.

Adolf Hitler's admiration of Richard Wagner is well known, and although he is not recorded as making any direct references to Wagner's 'Regeneration' writings, it is difficult to imagine that he was not aware of them.


Hitler, of course, always saw himself a primarily an artist, and considered art and classical culture to be essential elements for the creation of an ideal, regenerated state.
Equally Hitler's abstaining from alcohol and tobacco, and his vegetarianism are indicative of 'Wagnarian Regeneration Theory'.
Hitler, of course, like all those who were influential in the völkisch movement, and the NSDAP, was a 'child of his time', and it is undoubtedly this pervasive influence, of 'Regeneration Theory' proclaimed from the 'grüner Hügel' (the Green Hill at Bayreuth), that now enables us to refer to the 'dritte Reich' as the 'grüne Reich'.
These völkisch regeneration concpts were espoused by German youth, and associated with such groups was the 'Wandervogel' movement, which was a precursor to the Hitlerjugend.

Liebenel's approach to Regenerierung was decidedly more mystical and occult.
This is not surprising as Lanz became a monk in the Cistercian order in 1893, assuming the name Georg, and living in the Heiligenkreuz monastery.
In 1894, he claimed to have been "enlightened" after finding the tombstone of a Knight Templar, and began developing his theories of "blond Aryanism" and the "lower races".
He left the monastery in 1899; after having an overwhelming experience while conducting academic research at Die Abtei von Lambach.
By a strange coincidence Adolf Hitler, who was then only a boy, was in the choir school at Lambach at the same time - and we are left with the question of if there was any connection between the signs of great agitation, 'like of a person who had made a great discovery', on the part of Liebenfels, (as reported by the other monks) and the presence of the youthful Hitler.

For Liebenfels, all aspects of 'Entartung' were the effects of 'miscegenation' (racial cross-breeding).
In occult terms this had caused the atrophy of the paranormal powers inherited by the Aryans from the Æons, but these could be restored by the 'selective breeding' of pure Aryan lineages.

Miscegenation - (from the Latin 'miscere' 'to mix' and 'genus' "kind") is the mixing of different racial groups through marriage, cohabitation, sexual relations, or procreation. The term miscegenation has been used since the 19th century to refer to interracial marriage and interracial sexual relations, and more generally to the process of genetic admixture. The concept of miscegenation is tied to concepts of racial difference.

This belief in 'miscegenation' derived mainly from the teachings of Helena Blavatsky - as presented in the 'Secret Doctrine'.

In particular, Blavatsky stated that the Fourth Root Race  interbred with animals in order to produce human-animal 'chimeras' to use as 'sex slaves' - thus introducing the initial degeneration that resulted in the numerous lower races, which Liebenfels referred to as 'untermenschen'.

Root races are stages in human evolution in the esoteric cosmology of theosophist Helena Petrovna Blavatsky, as described in her book 'The Secret Doctrine' (1888). These races existed mainly on now-lost continents. 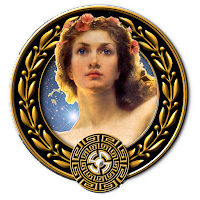 OSTARA - SPRING and a NEW BEGINNING

The essence of Ostara, both for the ancient Nordics, and for the readers of the journal, 'Ostara', was the concept of 'regeneration', and the creation of a better world.

This was undoubtedly at the root of the Christian's usurpation of the festival of Ostara as their 'Easter'.

The followers of the völkisch movement, including those who supported and created the Third Reich, almost certainly never thought of their beliefs as dark and evil, but rather saw them as a movement toward the light, and a new and brighter world, which had finally been regenerated and made new.

Please Note: This website is not intended to support, condone or encourage any of the beliefs, policies or ideologies described herein. The website is provided purely for academic study of various historical periods, and does not relate to any contemporary events or circumstances.